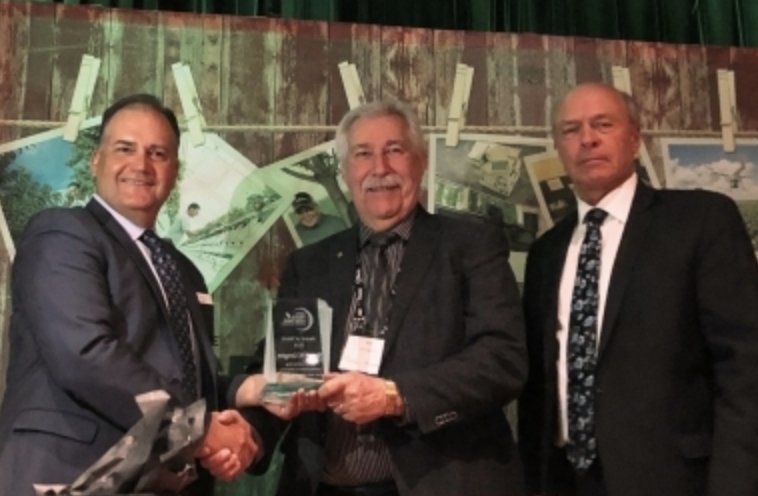 Linington recently retired after serving as Senior Policy Advisor with the Labour Issues Coordinating Committee (LICC) for the past 15 years. Previously, he had been employed by the Ontario Ministry of Agriculture, Food and Rural Affairs in various capacities for more than three decades, starting with an associate agricultural representative position in Kent County in 1973.

“Ken’s expertise on labour issues, ranging from minimum wage to employment standards has had an impact on every fruit and vegetable grower in this province,” says OFVGA Chair Bill George. “We appreciate his many years of service to our sector and the valuable support he has provided agricultural organizations on labour-related issues.”

As part of LICC, Linington was actively involved in helping the Ontario government win a Supreme Court ruling against the United Food and Commercial Workers over the Ontario Agriculture Employee Protection Act. LICC, a coalition of agricultural commodity and farm organizations representing the interests of Ontario farm employers, had intervenor status on behalf of the agriculture sector in the five-year long court case.

Linington monitored changes to the Workplace Safety and Insurance Board (WISB) for agriculture, and his policy support helped secure and retain special exemptions for agriculture under the Employment Standards Act. He was also active on the minimum wage file for many years, creating policy papers that helped form positions and presentations made by agriculture to committees, government officials and elected members.

Through a special contract with LICC, Linington also provided policy support to Flowers Canada. He was a board member of the Canadian Agricultural Human Resources Council and brought perspectives on national labour issues to LICC, Flowers Canada, and FARMS (Foreign Agricultural Resource Management Service), the organization that administers the Seasonal Agricultural Worker Program.

The OFVGA Award of Merit is presented annually to an individual or an organization that has made outstanding contributions to the fruit and vegetable industry. The Ontario Fruit and Vegetable Growers’ Association is the voice of Ontario’s fruit and vegetable producers on issues affecting the horticulture sector.