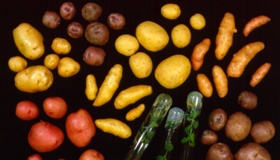 July 13, 2017, P.E.I. – This year’s Canadian acreage of J.R. Simplot’s genetically engineered Innate potato will be “very small” to non-existent, according to a company spokesperson.

Kerwin Bradley, director of commercial innovation for Simplot, says the company’s marketing strategy for new varieties is based on customer polls and identification of marketing channels. “We don’t plant potatoes, or give seed to growers, until we know that there is a place for them to sell them, so how quickly that develops depends on how quickly we develop routes to market for those potatoes,” he says.

“That way we ensure we keep the risk really low for everybody, especially the growers.”

The company has been talking to major Canadian retailers to “check the pulse” of their interest in the new potato, says Doug Cole, Simpot’s director of marketing and communications.

First generation lines of the Innate potato, which boast lower bruising and acrylamide, were approved by Health Canada and the Canadian Food Inspection Agency last spring. Second generation lines, which have late blight resistance and lower sugar levels for improved processing, have already been approved in the U.S., and Canadian approvals are expected later this year. READ MORE