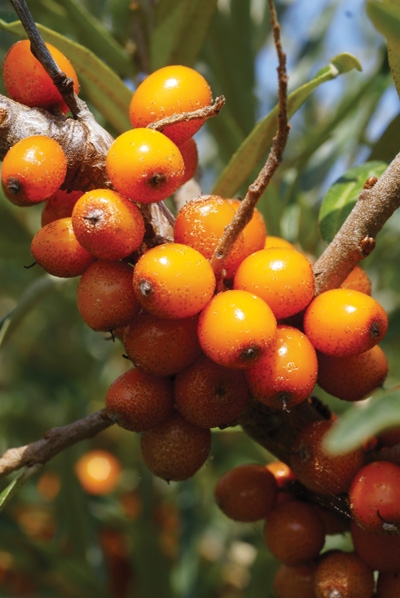 Sea buckthorn is a dense, deciduous shrub that can grow up to five metres tall. Its leaves are silvery green in colour, and its branches are typically thorny. The orange berries it produces are edible and have been referred to as the Siberian pineapple because of the berries’ taste and juiciness.

Awareness of this nutritious fruit is on the rise. In June 2011, the fruit received positive reviews from Dr. Oz, the popular TV doctor who used to make frequent appearances on The Oprah Winfrey Show, and who now hosts his own program, The Dr. Oz Show. He discussed how the berry may help prevent wrinkles and constipation, and also aid in weight loss.

“As soon as the The Dr. Oz Show episode aired, we received phone calls from all around the world about what we’re doing with sea buckthorn,” said Bill Schroeder, a researcher with Agriculture and Agri-Food Canada’s (AAFC) Agroforestry Development Centre (ADC) in Indian Head, Saskatchewan. “We’ve been identified as one of the experts in that area.”

Sea buckthorn is a dense, deciduous shrub that can grow up to five metres tall. Its leaves are silvery green in colour, and its branches are typically thorny. The orange berries it produces are edible and have been referred to as the Siberian pineapple because of the berries’ taste and juiciness.

Originally, the shrub was imported to Canada from Russia in the 1930s as an ornamental plant. On the Canadian Prairies, sea buckthorn has been used primarily in wildlife habitats and shelterbelts to offer fields and farmyards protection from snow and wind.

In the not-too-distant future, it is possible that the fruit will be grown on the Prairies more often as a commercial crop, since its nutrient-dense fruit can be used in a wide range of products, such as jams, jellies, liquors, juices, and even skin ointments.

Other countries, mainly China and Russia, have been using sea-buckthorn berries in food products and skin creams for hundreds of years.

AAFC scientists are working to increase the commercial potential of sea buckthorn. AC-Autumn Gold, a new sea-buckthorn variety developed by researchers at the ADC, will be released in 2012. It has the potential to propel sea buckthorn into the commercial market because of its high yields and fruit that is easier to harvest than previous varieties. Not only does this variety produce fruit that is almost twice as large as previous sea-buckthorn varieties, but it is almost thornless, which makes it an easier plant for producers to work with. The berries on AC-Autumn Gold grow from five-millimetre–long stalks attached to the bush’s stem. This results in berries that are easier to hand-pick than previous varieties whose berries grew in tight clusters. Longer stalks, combined with large fruit size, also mean the berries can be harvested mechanically.

“I think there’s a real opportunity here,” said Schroeder. “If growers can efficiently and cost-effectively grow sea buckthorn, then a Canadian manufacturing industry around sea-buckthorn products could develop.”

AC-Autumn Gold is the result of more than 15 years of research performed by scientists at the ADC. It is the first sea-buckthorn variety to be unveiled by the centre since 2005, when Orange September and Harvest Moon were released through the Canadian Ornamental Plant Foundation and made available through commercial nurseries.

Similarly, farmers who wish to purchase AC-Autumn Gold must source it through Canadian commercial nurseries.
Perhaps one day, AC-Autumn Gold’s berries become a permanent ingredient in the jams and lotions found in Canadian homes.