Despite the pandemic, Canada still managed to welcome the majority of its expected workers.

Despite COVID-19 delays in 2020, Canada welcomed nearly 22,000 agricultural workers in Canada by the end of April, compared with about 25,500 at the end of April in 2019. These numbers reflect a 14 per cent decrease from 2019 to 2020, highlighting the impact the pandemic has had in Canada.

On May 12, Marie-Claude Bibeau, federal minsiter of agriculture, published a statement on temporary foreign workers (TFWs) highlighting all the steps the Canadian government took to ensure the safety and reliability of the agriculture sector workforce.

“When COVID struck, we immediately got to work, with the top three countries of origin for foreign primary agricultural and food production workers: Mexico, Jamaica and Guatemala,” Minister Bibeau’s statement began. “COVID struck at the busiest time for many farmers. April is the month that sees the most number of agricultural workers arrive.”

Despite the pandemic, Canada still managed to welcome the majority of its expected workers. Canada welcomed 11,000 workers to Canada in April this year, compared to about 13,000, in April last year.

Minister Bibeau explained that all the federal departments involved in the Temporary Foreign Worker program (TFWP) worked together to simplify processes and facilitate the safe entry of incoming workers, including priority processing of applications, highlighting that work permit applicants can continue working with the same employer while they have an extension application being processed, and the measures announced today to fast-track approval for workers in non-SAWP (Seasonal Agricultural Worker Program) streams to change jobs or employers.

To increase flexibility of the TFWP, the federal government increased the maximum duration of employment under Labour Market Impact Assessments (LMIAs) from one to two years for employers of workers in the low-wage stream and removed the minimum recruitment requirements for the next six months, for workers in agriculture and food processing.

Significance to the sector

In 2018, according to Statistics Canada, there were nearly 55,000 jobs filled by temporary foreign workers in Canada’s agriculture industry and these accounted for 20 per cent of total employment in the primary agriculture sector. Although, temporary foreign workers in 2018 came from nearly 100 countries, the majority came from Mexico (51 per cent); Guatemala (20 per cent) and Jamaica (18 per cent). 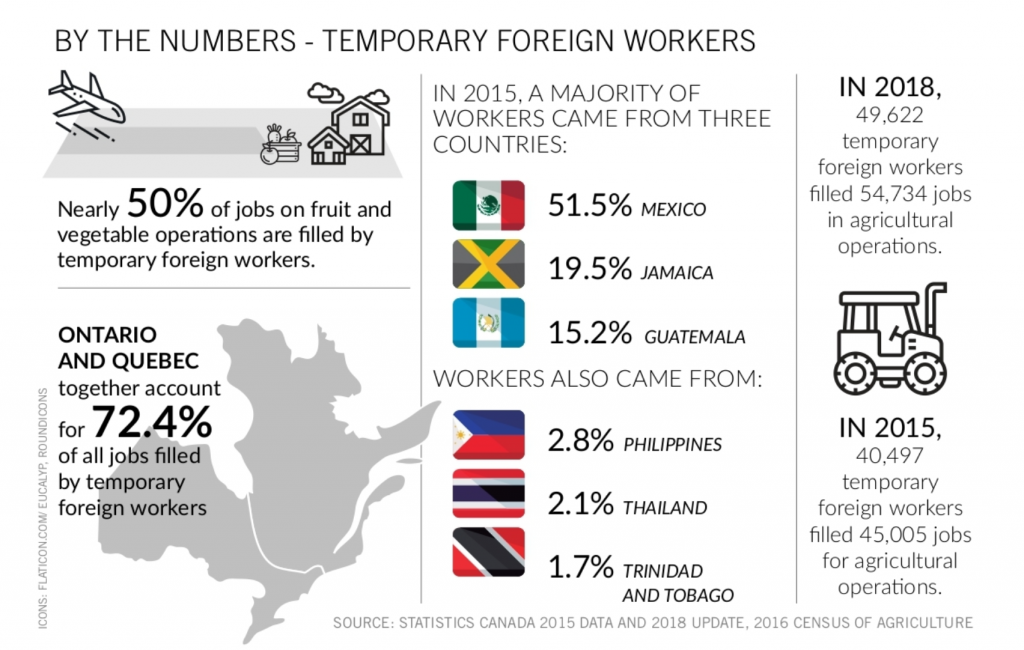 Statistics Canada’s 2016 Cenus of Agriculture provided a closer look at where temporary foreign workers were making the most impact. Eastern Canada and the horticulture sector accounted for most agricultural jobs.

Within the minister’s statement, several other supports announced by the Canadian government in recent weeks were also emphasized.

Additional support for the Canadian agriculture sector include:

“We recognize our producers and processors are important engines of the economies in their communities and our whole country. We will be there every step of the way to support their safety, their stability and their growth,” Minister Bibeau concluded the statement.