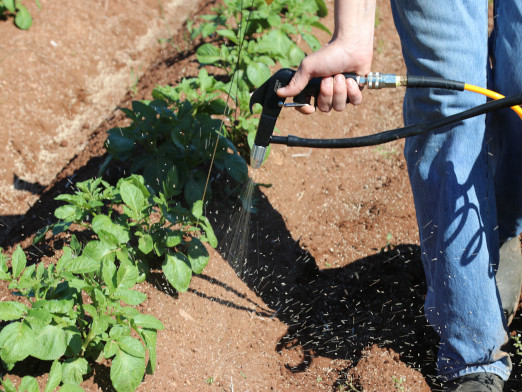 Weed hunters? No, it’s not a joke. It’s a real concept that aims to tackle the serious and costly problem of herbicide resistance for farmers and their crops. The technique is called “abrasive or projectile weed control” and was first developed by University of Nebraska researchers for weeds affecting corn crops.

Using a sandblaster, the university research team “shot” natural materials like corn grit, corn gluten meal and walnut shells directly at weeds. They found this alternative to herbicides was an effective way of killing the weeds or severely damaging them in corn crops while reducing costs and environmental impacts. But for years, it’s been more or less a concept to be proven for other important crops.

In an effort to bring this concept to reality, Agriculture and Agri-Food Canada (AAFC) scientists across Canada have teamed up to form the northern chapter of “weed hunters” as part of the Alternative Pest Management Solutions project to reduce pesticide and herbicide use. At the helm is Harrow Research and Development Centre scientist Robert Nurse.

“Farmers are finding fewer herbicide options available to them due to resistance from weeds. Projectile weed control could provide them with a safe alternative to destroying weeds that has a very low environmental impact.”

To prove the projectile weed control concept, AAFC scientists recently embarked on a two-year project. They chose four high-value crops whose common weeds have fewer herbicide options available for farmers and are becoming increasingly resistant to the available herbicides. They are targeting the five most common broadleaf – or non-grass – weeds in each crop.

Each scientist is equipped with a commercial sandblaster attached to an air compressor to shoot corn grit or walnut shells, in fine and coarse sizes, and a mix of both materials at a rate of 480 kilograms per hectare, amounting to a couple grams per square metre. In small plots, some fields will be treated with projectile materials only, while others will be treated with projectiles in combination with a reduced rate of herbicide to see if the same weed control can be achieved without any herbicide.

“It’s all about the right timing. We plan to shoot weeds at the same time that farmers might use a herbicide, so it fits into their regular schedule. It also lines up to when the weeds are just emerging from the soil and are most susceptible. They can absorb damage from the projectiles better when they get older.”

By 2024, the team hopes to find the best projectile material, including its ideal size and application rate, with weed control of more than 80 per cent without causing significant crop injury and yield loss. The researchers also want to see if air-propelled abrasives can reduce overall herbicide application in potatoes, dry beans, vineyards and blueberries.

In order to efficiently apply the materials over farm fields, researchers at the University of Nebraska developed a modified crop sprayer to push projectile materials with compressed air through a nozzle over the top of and beside the crop. McKenzie-Gopsill explains that a granular fertilizer spreader would work as well. Both options are simple to modify and would be easy for farmers to implement.

The results of this AAFC research could provide a quick, cost-effective and simple solution for farmers trying to control weeds in their crops and reduce the environmental impact of herbicide use. Developing and registering a new herbicide in Canada can cost hundreds of millions of dollars and take 10 to 15 years. The air-propelled abrasives being tested by AAFC would not require registration by Canada’s Pest Management Regulatory Agency (PMRA). Without the registration requirement, new projectile materials could be made available to farmers after only two years of small-plot testing. As the materials are all natural, farmers could even produce it themselves at a lower cost.