The extent of damage to a flower caused by the beetles. The beetles started chewing on the plant stem behind the flower, which means no squash. Photo courtesy of AAFC.

Every year, Canadian growers anxiously anticipate harvesting their crops. They spend countless hours in the field preparing for harvest season and invest significantly in crop protection products. As you can imagine, it can be very disappointing to find your crop destroyed by pests, such as striped and spotted cucumber beetles.

Suzanne Blatt, research entomologist from Agriculture and Agri-food Canada (AAFC), knows this feeling all too well. As a research specialist in tree fruit and vegetable integrated pest management (IPM) at the Kentville Research and Development Centre (KRDC) in Nova Scotia, Blatt began working on the striped and spotted cucumber beetle project in 2020 in collaboration with Perennia. She and her team have been researching a more sustainable method to keep crops safe from these pesky beetles. 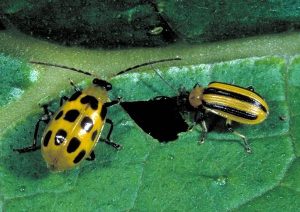 The spotted cucumber beetle is also known as the southern corn rootworm. They are more prevalent in the southern United States, but have made their way to Nova Scotia over the last few years.

Striped and spotted cucumber beetles overwinter as adults in the hedgerows around fields and move into the field in late spring/early summer, making it hard to get rid of them. This year, the beetles appeared in early June at the KRDC, but as our climate changes it is not uncommon for growers to see the beetles earlier in the season.

The striped and spotted cucumber beetles are an agricultural concern for growers, as a large number of them can feed on and destroy newly transplanted or germinating cucurbit plants. The adult beetles feed on the leaves and flowers, while the larvae are soil-dwellers and will feed on the roots of the plant. Both types of damage affect the plants’ ability to grow. If there are enough of these pests, they will chew away the flower and growers will not see any crops that season.

These beetles also transmit bacterial wilt. Bacterial wilt is a disease that reduces the plants’ ability to function properly and the leaves will eventually die. Loss of leaves will lead to the plant being unable to produce a sizeable squash. Striped and spotted cucumber beetles carry the bacteria in their gut and when they feed it is transmitted to the plant.

“Home gardeners and commercial growers alike can lose their squash and zucchini plants to these beetles,” Blatt says. “For the home gardener, it’s the loss of their home-grown fresh vegetables, but for the commercial grower, it’s the loss of income. Both beetles thrive in Nova Scotia and ‘a few beetles’ can quickly become ‘a few thousand beetles’ in a squash planting.”

Trial and error of trap cropping

In 2020, Blatt and her team initially explored the use of trap crops and companion plants in a “push-pull strategy” in squash. Nasturtiums (companion plant) acted as a repellent and would push the beetles away from the crop, while a different variety of squash called Baby Blue Hubbard (the trap crop) was planted around the crop. The trap crop would attract the beetles to feed and lay their eggs in this new location. When populations of the beetle were low to moderate, Blatt observed less damage to the crop in plots which had a trap crop while the companion plant experienced some damage.

When the team repeated the trial in 2021, the beetle populations had grown significantly and created such high pressure that they didn’t see any benefit of either trap crop or companion plant. They did however learn two interesting facts that will help their research moving forward:

“We were cautiously excited about our results from 2020, as these types of strategies have been used by home gardeners with some success,” Blatt said. “Studies in the United States showed a broad range of effects depending upon squash plant/trap crop combination and pest pressure. The work we did highlights the need to manage the trap crop in some way so we can reduce the second flush of adults and larval feeding.”

Next steps in the research

While Blatt’s exploratory research continues on preventing the striped and spotted cucumber beetles from destroying cucurbit plants, the next step is working to refine the trap crop system. Blatt will be combining trap cropping with entomopathogenic nematodes (a group of microscopic thread worms that will infect insects present in the soil and release a bacterium that causes death) to try and reduce the impact of the second flush of adults. Her team will be working with squash, broccoli and radish.

Using entomopathogenic nematodes is not a new practice, but the product can become pricey for commercial growers. Blatt hopes that applying these nematodes to only the trap crop will help reduce that cost (as the price will be more comparable to the cost of a pesticide). This method could also reduce the need for an additional tractor pass in the field, thus saving time and fuel and overall reducing the carbon footprint in vegetable production.