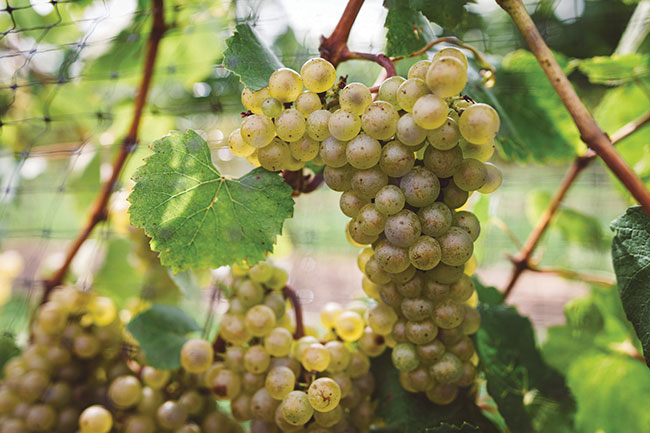 Chardonnay grapes at On Seven Estate Winery, a new organic vineyard in the Niagara region. Photo courtesy of Robert Elliot.

Although Canada’s share of global wine production is small, producers have found success through careful selection of the right grape varieties, and cultivation in regions with microclimates that are appropriate for viticulture. According to a 2019 report by Manitoba Agriculture (MA) and the Canada Organic Trade Association (COTA), Canada grew approximately 598 hectares of organic grapes in 2017, or about five per cent of Canada’s total grape crop. The largest regions for organic grape growing in Canada are in British Columbia, Ontario, Quebec, and Nova Scotia.

Ann Sperling, director of winemaking and viticulture for Niagara’s Southbrook Vineyards, told the Organic Council of Ontario in 2018 that the principles guiding viticulture certification are similar to other agricultural crops. In organic production, the use of artificial chemical fertilizers, pesticides, fungicides and herbicides is prohibited. The health of the soil and surrounding environment is key to growing quality grapes, and important for the long-term sustainability of the vineyard. There is a three-year organic transition period, during which time the producer must follow organic practices, paperwork, and fees, but cannot yet use the Canada Organic Logo. This is also true for any other fruits used to make cider or wine. The three-year transition period can be a challenge as grapes are a perennial crop, and growers face the risk of lower yields while adjusting to using alternative pest and fungal control methods.

The three-year transition period can be a challenge as grapes are a perennial crop, and growers face the risk of lower yields while adjusting to using alternative pest and fungal control methods.

Many Canadian organic vineyards complement their organic methods with other sustainable practices. Southbrook Vineyards located in Niagara region of Ontario, for example, uses solar panels to meet most of its power needs, has a forest biodiversity reserve covering 10 per cent of its land, and holds Demeter certification for biodynamic production. According to the Canadian Vintners Association, biodynamic production looks at the vineyard as a whole ecosystem and specifies that only plant- or animal-based products can be used as fertilizer. In accordance with this certification, Southbrook’s flock of over 85 grass and hay-fed sheep is shepherded in and around the vineyard, fertilizing and promoting biodiversity. Southbrook also enhances soil fertility using cover crops and manure. Tawse Winery, located in the Niagara Escarpment, employs biodynamic farming as well, including chickens and sheep in the vineyard for fertilization, insect control, and vine pruning purposes. Ontario’s Frogpond Farm Organic Winery also includes animals in their wine production, keeping a variety of plants and animals on the farm to create a diverse and balanced ecosystem. They plant herbs and flowers between the rows of grapes to attract pollinators. Hidden Bench Estate Winery employs geothermal energy to heat and cool their buildings and power their winemaking processes.

Ontario’s Frogpond Farm Organic Winery also includes animals in their wine production, keeping a variety of plants and animals on the farm to create a diverse and balanced ecosystem. They plant herbs and flowers between the rows of grapes to attract pollinators.

A common misconception about organic wine is that it is free of sulphites, a preservative used in winemaking for its antibacterial and antioxidant properties. Some individuals are sensitive to sulphites and develop allergies. While sulphites are sometimes viewed as “unnatural,” they are in fact a natural by-product of the fermentation process. In organic wines, added sulphites are limited, which is an added production challenge.

In spite of the challenges of organic production, a number of Canadian wineries have been producing high-quality organic wines with great success. Organic wine is becoming increasingly popular, with global organic wine consumption doubling between 2012 to 2017. According to the COTA/MA report, the LCBO’s sales of organic wine reportedly doubled between 2010 and 2014, and Quebec’s SAQ reached organic alcohol sales of $97 million in 2017.