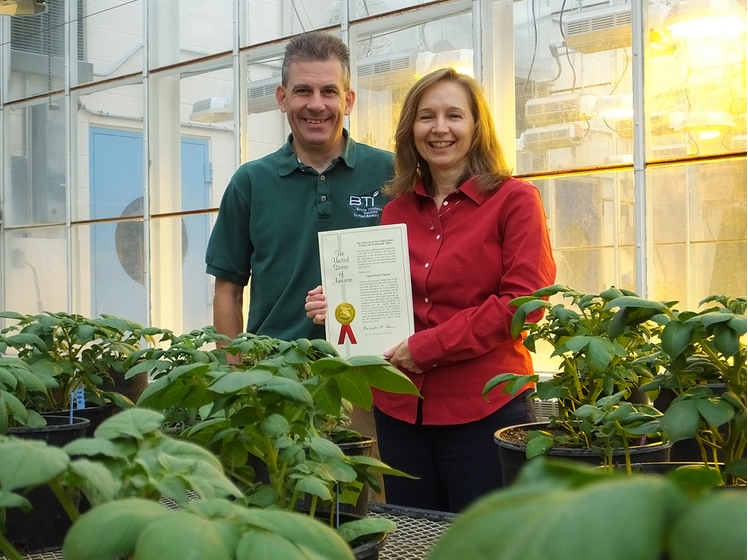 November 4, 2015, Ithaca, NY – The humble potato may become an important source of beta-carotene, thanks to research from the Boyce Thompson Institute (BTI).

Assistant professor Joyce Van Eck has received a new patent on a method to bulk up beta-carotene – a precursor of vitamin A – in potatoes. She is collaborating with Paul Anderson, executive director of the Institute for International Crop Improvement at the Donald Danforth Plant Science Center in St. Louis, Missouri, to apply lessons learned in potatoes to cassava plants. Biofortified cassava could help alleviate vitamin A deficiency in children in developing countries.

“The idea was to produce potatoes and use it as a model for other crops in developing countries, especially in areas where vitamin A deficiency is a problem,” said Van Eck.

Vitamin A is vital to good eye health, proper growth and a strong immune system, and its deficiency causes blindness and premature death in hundreds of thousands of malnourished children each year.

Potatoes are not a good source of vitamin A because beta-carotene is either nonexistent or is present in almost undetectable quantities in potatoes. This is because an enzyme called beta-carotene hydroxylase converts it into another metabolite that is not a vitamin A precursor.

To increase beta-carotene levels in potatoes, Van Eck inserted a specially designed segment of DNA into the potato genome to silence the gene that codes for the beta-carotene-converting enzyme. She used a technique that ensures that the activity only occurs in the tuber, while the rest of the plant is unaffected.

When the beta-carotene hydroxylase gene was silenced, beta-carotene built up to levels that would satisfy up to 18 per cent of a toddler’s daily nutritional requirement. Though they will need to use additional strategies to boost beta-carotene levels further, the research shows that biofortification is indeed possible.

“There are lots of different enzymes in the beta-carotene pathway,” said Paul Debbie, the director of technology transfer at BTI, “but what you’re looking for is one where you can silence the gene, increase the amount of beta-carotene and at the same time you want to make sure you have a viable, productive plant.”

Debbie began the patent process in 2004, filing with collaborator David Garvin of the USDA Agricultural Research Service. He said BTI specifically crafts licensing agreements to ensure that the technology can be used freely in developing countries where it is needed most.