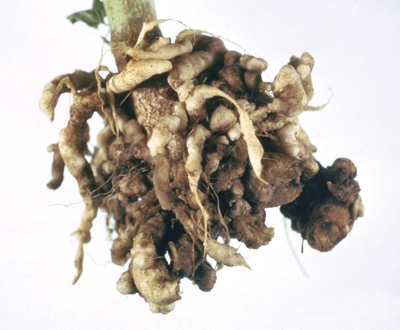 An example of clubroot in broccoli.

Soilborne diseases can be a producer’s worst nightmare. Persistent, easily spread, destructive. Estimates suggest that clubroot, a disease that targets cole crops (cabbage, broccoli, cauliflower and other plants in the Cruciferae, or mustard, families), affects 10 per cent of cultured lands worldwide.

Through the Canadian and British Columbian governments’ partnership in the Growing Forward program, Brock Glover of E.S. Cropconsult (an integrated pest management firm in B.C.) developed a biosecurity program for cole crop growers focused on clubroot. Although Glover’s study focused on B.C. producers, the practices outlined will be beneficial nationwide.

Roots of clubroot-infected plants become distorted, taking the shape of a club or bulbous limb. Diseased roots can’t absorb water or minerals, leading to stunted growth, the yellowing and dropping of lower leaves, possible failure to form heads and the potential for crop loss. Perhaps the greatest reason to learn about clubroot is that spreading contaminated soil and clubroot spores to a non-infected area is surprisingly simple and no one yet knows how much soil – or how many spores – it takes to cause an infestation.

“Clubroot is an extremely hard disease to control once it becomes established in a field,” says Glover. “This is due to the ability of the spores to remain viable for up to 18 years in the soil and also the ease with which the disease is spread with the movement of soil.”

Chemical treatments may appear to be a quick solution but, as Glover points out, they have the drawbacks of phytotoxicity and destruction of beneficial soil organisms.

The greatest risk of infested soil movement is caused by tillage equipment, but soil can also be moved by other machinery, humans, animals (some spores have been shown to remain active even after passing through an animal’s digestive tract), seeds, wind and water.

Prevention and control begins with equipment. Remove soil from machinery before leaving a field by sweeping loose soil off, power washing thoroughly, then disinfecting the equipment with a solution of one to two per cent bleach in water.

Glover notes, “The one to two percent bleach solution recommendation comes from research done by Dr. Ron Howard and his colleagues in Alberta to develop a clubroot biosecurity program for the canola industry.”

Visitors can also cause soil movement, so restrict access. Ensure vehicles are left outside the field, and establish a protocol of wearing boot covers or washing and disinfecting boots with bleach solution, sanitizing hands and avoiding entering muddy fields. By installing easy-to-clean work areas and foot baths, and maintaining regular pressure washing, you will reduce possible cross-contamination. Dispose of other plant material from infested fields properly. Ensure weeds, straw, hay and silage are not reused or left standing.

When introducing new seed, inspect carefully and refuse the shipment if any symptoms are apparent. Be sure to buy from a reputable source that will guarantee no soilborne diseases. The same diligence is necessary for seedlings. Don’t place seedling trays on the ground in the field – you may pick up and transfer soil and spores. Seeds and planting supplies should be stored away from any washing or disposal areas and seedling trays should be cleaned and disinfected like other equipment.

When approaching planting, keep in mind that resting spores rise quickly if crops are not rotated; rotation is one of the best methods of keeping clubroot in check. Scout fields regularly for signs of the disease and document your findings.

Soil erosion issues can be managed by using cover crops, planting trees as wind breaks, planting permanent cover on field edges and allowing grassy waterways. Water movement is the other side of the coin and spores easily spread through contaminated surface water runoff, waterlogged areas and contaminated irrigation water. Clubroot is most severe in wet, acidic soil. Avoid overwatering and ensure irrigation water is not shared with a contaminated field, plus use small particle lime to help to raise pH.

“If the disease is left unchecked (there) is the possibility that growers could lose the ability to grow cole crops in some fields for as long as 18 years,” Glover comments.

Although this study of clubroot management is primarily aimed at cole crops, mustard family members (such as canola) and non-crucifers (such as rye grass and dock) are also susceptible. By observing the recommended practices you will be able to reduce the risk of spreading clubroot disease within your operation and ensure cole crops continue to be a valued part of agriculture. ❦