Whittamore’s Farm in Ontario shuts down the public side of its business after almost 30 years of providing Torontonians with “Your Farm in the City.” “It is part of who I am but I do want more balance in my life,” Mike Whittamore said. 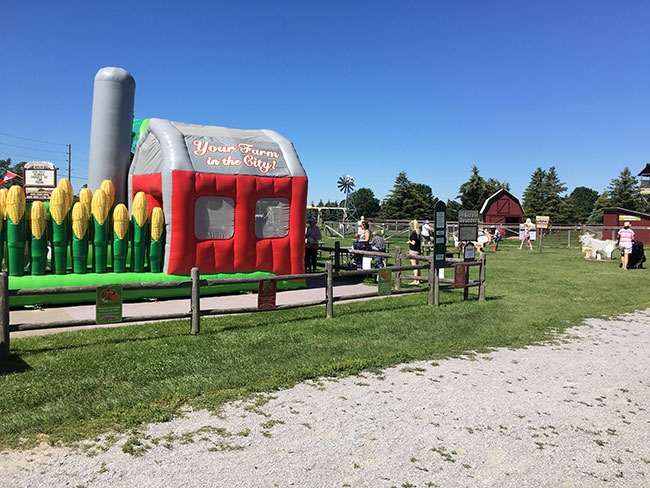 Whittamore’s Farm welcomed about 300,000 people annually to its pick-your-own fields, farm shop and paid admission play area. As of fall 2017, the operation is closing its gates to the public. Contributed photo

For the last 32 years, a typical day running Whittamore’s Farm in Markham during the busy planting and tourism season has started at 5:30 a.m. – at the latest. At the agri-tainment powerhouse farm business, Mike Whittamore has owned and operated the farm’s Pick-Your-Own fruit and vegetable business, and his brother, Frank, and Frank’s wife Suzanne have owned and operated the onsite Farm Shop (freshly-picked produce, baked goods and preserves) as well as the Fun Farm Yard and Pumpkinland, both replete with farm-themed activities.

The 200-acre farm’s history began in 1804 when land adjacent to the Rouge River Valley in Markham was settled by Henry Lapp. Nearby, a little over a century later, a market gardener in Richmond Hill named Frank J. Whittamore began selling vegetables door-to-door in the Yonge and St. Clair area. In 1952, Frank’s son, Gilbert, bought a 50-acre farm in southeast Markham right next door to the Lapp Farm. Here, he grew strawberries and vegetables, which were wholesaled at the Toronto Food Terminal and local stores. Being neighbours, young Gilbert grew up knowing young Evelyn Lapp and the rest is history. They married and together in the mid-1950s established a small pick-your-own strawberry and raspberry operation, a first of its kind in Ontario. Over the next 60 years, the couple expanded the variety of crops they grew, and their sons – Mike and Frank – went on to create one of the largest agritourism business in the country, one that welcomed close to 300,000 visitors every year. From spring school groups enjoying the two-storey tree fort and slide, chicken show, tractor track and spider web climb to customers picking fruits and vegetables all summer long to legions of visitors enjoying Harvest Festival Weekends in the fall – complete with corn maze, wagon rides through the spooky forest and pumpkin cannon show – it’s always a very busy year.

Mike, Frank and Suzanne agree there really is no typical day during the busy season, but that each day starts at daybreak at the latest and ends at sunset at the earliest.

“We grew 120 acres of fruits and vegetables including strawberries and raspberries and a number of vegetable crops,” says Mike. “We’ve planted 200,000 strawberry plants every year, with 18 seasonal agricultural workers from Mexico doing the bulk of the planting, weeding, irrigating and harvesting of the crops.”

Throughout the warm season, Mike’s tasks range from managing employees and crops, spending sleepless nights spraying water on the sensitive strawberry blossoms to protect them from frost and getting 1000 things done to prepare for and run the pick-your-own operation, from fencing, buildings and cash-out to the hiring of 30 staff and four supervisors. On any given year, the six-week pick-your-own business processes 75,000 to 100,000 people.

Starting in April every year, Frank and Suzanne also rise at daybreak to set up the Farm Shop and Fun Farm Yard before the season began, and to ensure a good time for visitors from May to October. Starting every year at the beginning of May, Frank was up at 1 a.m. travelling to the Ontario Food Terminal two to three days a week to pick up fresh goods for the Farm Shop.

“When I first started going back in the 1980s, I would arrive at the terminal around 5 a.m. but over the years, I realized that more buyers were getting there earlier,” he says. “So, if you wanted what was on your list, you had to do the same. I also found that with going earlier, I could get back before rush hour. Mike and I also delivered berries to the terminal. We’ve had many great conversations in the truck.”

This year was the final year for the public to visit Whittamore’s Farm. All the agri-tainment aspects are being shut down.

“There’s no one reason for making this the final year,” says Frank. “Reflecting on the past and pondering our future has brought us to this point. This has been a very successful business. We’ve worked hard and put our whole lives into it. When we’re in season, it is literally 24/7. And that’s okay. I was told once: ‘Know when to go hard and expand and know when it’s time to slow down.’ The time is right.”

Over the years, Mike says he has most enjoyed watching the experience of young visitors.

“Many kids have never been to a farm and it’s important that people know where their food comes from,” he says. “I’ve also done a lot of work with low-income people from Regent Park in Toronto, inviting them to come and glean fruits and vegetables for free once we have finished with a field. We also gave them passes to our Fun Farm Yard. This trip has been a real highlight for them and often the social workers teach them afterwards how to cook with our produce. The whole event is very gratifying for me.”

Whittamore’s Farm welcomed about 300,000 people annually to its pick-your-own fields, farm shop and paid admission play area. As of fall 2017, the operation is closing its gates to the public.

Frank echoes the sentiment. “I like watching families, young and old, enjoy themselves and being able to offer the public a chance to play in my backyard has been a great gift,” he says. “We coined the phrase ‘Your Farm in the City’ a number of years ago because many of our customers felt that Whittamore’s Farm is their farm. It’s great to see the smiles on their faces. Generations of customers have visited us for over 60 years and it’s been one of my greatest pleasures that we were able create traditions and memories for so many people.”

Over the years, Whittamore’s has hired hundreds of local students [similar to customers, sometimes generations of them] and continues to have lots of former employees keep in touch and share memories.

“For many of them, working at Whittamore’s was their first job,” Frank notes. “One young man who had his first job with us many years ago as a produce boy is now the produce manager of a large independent grocery chain.”

For her part, Suzanne says she “had no idea” what she was getting into when she left a corporate job in Montreal to be with her new husband on his family farm in 1989. But it’s been an experience she will always treasure.

“It has been a labour of love,” she says, “and an honour and a privilege to help grow this business.”

Frank says Suzanne “is the most wonderful person I know. She became a farmer’s wife and a huge part of the success of what Whittamore’s Farm became. She is an inspiration to us all.”

Members of the next generation (Frank and Suzanne’s two boys, and Mike and Frank’s nieces and nephews) have all had the opportunity to work at the farm over the years, and Frank says it gave them both a sense of responsibility and a great work ethic. At this point in time, they are all in other careers and the farm is not in their plans for the near future.

“We encouraged them to pursue their own dreams, but we also said that at some point if they want to operate a business like this, we would find a way to make it work,” says Mike.

The trio have decided to move on to other things.

“I’ve run the business for 34 years plus for five years prior, I ran the business for our father,” Mike says. “My whole life has revolved around this business. I was directing cars to the parking lot when I was seven and riding the strawberry planter when I was 10. It is part of who I am, but I do want more balance in my life, a change and a rest. I enjoy cycling, gardening and other summer activities that I simply cannot pursue. I bought a motorcycle two years ago and I have only driven it 1100 km. I have a big bucket list and there is no time like the present to work on it.”

All three of them plan to work in some capacity with food banks and low-income families or pursue other types of volunteering. Next year, they will grow grain and underseed some fields with green manure crops.

Frank notes that over the years when he’s been in the fields working the ground, “I try to imagine how my forefathers would have developed this same ground to make it possible to farm, clearing the land and growing the crops in between the stumps with only hand tools. It’s almost unimaginable. I’m lucky that our great-great-grandfather was Henry Lapp and he settled here in 1804. I’m also lucky that my grandfather Francis J. Whittamore left England in 1903 and came to Canada where he learned to market garden. The marriage of those two families by our parents in this great country has allowed us to have a wonderful life on this farm. For that, I am truly grateful.”