Tahir Raza came to Canada with US$500 in his pocket. A little over 20 years later, he and his brother, Sajid, won the 2017 Golden Apple Award for B.C. Their story is an example of where hard work, good horticulture practices, plus family and industry support can take you. 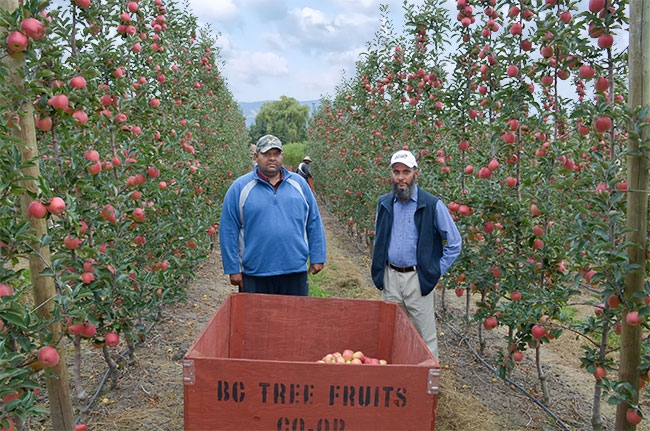 The Raza brothers started with Gala and Ambrosia and have added Honeycrisp. Photo by Tom Walker

When Tahir Raza came to Canada from Pakistan in 1994, he did not expect to be an owner of an award-winning orchard.

“I came here to join my wife,” he explained from his orchard home in Vernon, B.C. “At that time, I did not have an idea that I would be farming. I had $500 [US] in my pocket. As a newcomer, you are starting from the beginning and you cannot even dream about having land. I was just looking to get a job of any kind.”

Tahir’s first job was in an orchard and that was the beginning of a journey that would see him and his brother, Sajid, win the B.C. Golden Apple Award for 2017.

The Raza brothers are an example of where hard work, good horticulture practices, plus family and industry support can take you.

After two years of working in that first orchard, Tahir landed a labour job in the local glass plant making bottles.

“On my days off, I would go and help Sajid, who was managing an orchard in Lake Country just south of Vernon,” Tahir explained.

He would arrange his holidays for picking season and their wives would join them.

“We wanted to learn as much as we could and do the best job that we could for the orchard owner.

“My shifts were four days on and four off,” Tahir recalled. “That allowed me to be in the orchard working with Sajid.”

Ten years later, five acres came up for lease at the farm Sajid was managing and Tahir leased another 12 acres nearby. The timing was perfect as the glass plant was closing down.

“I had the 17 leased acres of my own and I continued to help Sajid as well,” Tahir said.

The brothers have not looked back.

Located just north of Vernon, the land had a sloped north-east aspect and soil tests had come back positive.

“Then we bought a second 25 acres but we kept our lease and the management jobs.”

The brothers would work the orchard jobs during the day and develop their our own land in the evenings. When the lease properties sold, and a son came back to take over the management position, they were on their own full time.

“It’s an opportunity here in Canada,” Tahir said. “If you work hard enough, you can have your dream. Working at a labour job in Pakistan, I would never been able to buy even one acre.”

Sajid admitted that looking at just the economics of farming does not make it all that attractive an investment.

“We like the lifestyle of working hard outside,” he said. “We were third-generation farmers in Pakistan. We learned the orchard business here and we like to grow what others can consume.”

While they were able to buy land, there wasn’t money for paying someone to put in an orchard, so the brothers used the skills they had to do it themselves.

The trees, posts, wires, and irrigation systems [drip and spinners] were all installed by the family. They even found an old wire bending vice and made their own clips – saving them more than $50,000.

They started with Gala and Ambrosia and have added Honeycrisp. This spring, they had 20 acres in full production and a first year crop on 10 acres. The apples are on both 22-inches by 10-foot and 20-inches by 9-foot spacings.

The Raza brothers started with Gala and Ambrosia and have added Honeycrisp.

A 10-acre planting of cherries this spring added to the eight acres already in the ground. Lapins, Staccato, Sentennial and Sweetheart make up the majority plantings, all on Mazzard rootstock that were also budded on the farm.

“We are trying just a couple of rows of Rainier and Satin for the fruit stand we plan to have,” Tahir said.

The majority of apples and cherries will go to the B.C. Tree Fruits Cooperative packinghouse.

“We planted a small amount of the familiar names like Macintosh and Spartans for the fruit stand as well,” Tahir said.

The brothers are very happy with their yields.

“When we were starting and looking at other orchards, we were seeing growers averaging 40 bins an acre,” Tahir said. “We were aiming to get 50 to 60 bins of good quality and our business would be okay, the way we did the work and grew the trees.”

“Last year, our Galas were over 80 bins per acre average and Ambrosia [on immature trees] about 75,” Sajid said, smiling widely.

“We want to work on our trees to get 80 apples that are size 88 and that would give us 80 bins to the acre,” Tahir says. “But we need quality fruit as well, that is where the money is.”

The cool fall nights in the north Okanagan valley help colour up the Ambrosia.

“An apple with colour can bring up to 50 cents a pound,” Sajid explained. ”But the same size apple without the minimum one-third red area only gets 17 cents a pound.”

The brothers maintain they are not doing anything different, just doing things the best that they can. That starts when the tree goes into the ground. “You need to fertilize according to your soil sample and have a new sample every second year,” Tahir said. “If you fertilize the wrong way, you are actually damaging the trees.”

Maximize the use of your land by filling in the gaps in your rows, Tahir advised.

“Your expenses will stay the same as you are spraying, fertilizing and watering an empty spot, but your production is only 90 per cent so we never have a missing tree.”

“Walk through your orchard every day, stop to look and know what the trees are telling you,” he added. “Then you can be on top of everything.”

Tahir believes it is very important to support your workers to do the best job that they can. The brothers hire both locally and through the Seasonal Agricultural Worker Program (SAWP).

“We work alongside our workers and we never ask them to do anything that we can’t, or wouldn’t, do ourselves,” he said. “We are always looking for a better way to do things and then we train our workers. We pick a tree from the top down, and we go to the next from the bottom up so that we are not spending time standing back up and bending over again.

“But it is not everything we are doing, we are getting help. We get help from the B.C. Tree Fruits field service and from other farmers.  One of the things that I like about Canada is that people are so willing to help.”