Features Profiles
A decade of growth, change and challenge 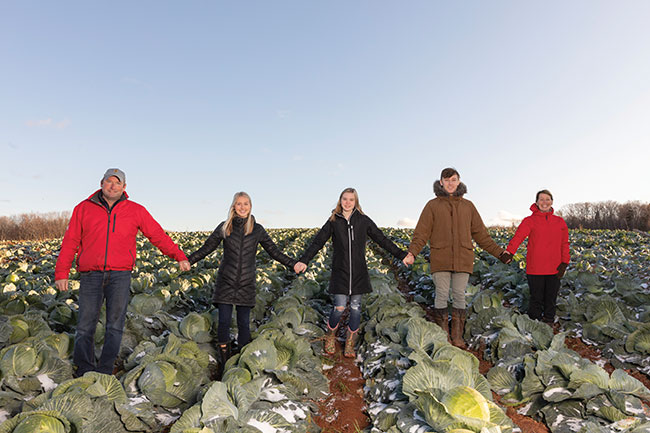 Greg and Tania MacKenzie with their children Haley, Gracie and Austin in their cabbage field. Photo by Berni Wood.

Ten years ago, Toy Story 3 was playing on the big screen, Starbucks started offering free Wi-Fi to customers, and Greg and Tania MacKenzie of MacKenzie Produce in Stratford, P.E.I., won the Outstanding Young Farmers award. The family was subsequently featured in Fruit & Vegetable Magazine in 2010 where readers learned about their family, their successful purchase of an established mixed farm and what it’s like to become Outstanding Young Farmers alumni.

“We bought our farm without farm land,” Tania explains. It was 2003 when they started out.

That’s when the couple purchased Balderston’s Produce, where Greg worked and saw potential. They bought the cole crop side of the business, about three acres that included a house, cole crop business and warehouses, but knew the land purchase was more than they wanted to take on financially, so began leasing – a model they continue with today.

“We lease all of the land we farm. It does make it hard because many landowners decide to sell the land,” she says. “We are in an area that the population is growing extremely rapidly. We are certainly getting squeezed.”

“We are in an area that the population is growing extremely rapidly. We are certainly getting squeezed.”

Still, the MacKenzies are able to lease about 300 acres. Because they are on a three-year crop rotation system, part of their leases are sublet to grain or soybean farmers for a season.

“We pay the land owner and give the other farmer an invoice for farming it,” she explains. 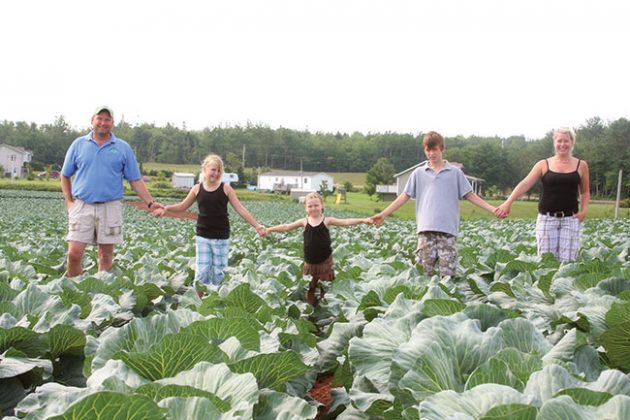 Farming may not be in the MacKenzie children’s futures, but Tania suspects a career path in agribusiness may be in the cards for her kids. Photo by Alanna Jankov.

Creative solutions like these are part of what won them the Atlantic Outstanding Young Farmers (OYF) award in 2009. As past recipients, they are alumni and their perspectives are appreciated by Andrew Lovell, who won OYF in 2016 and is the co-chair of the national OYF event December in Fredericton.

“They’re at the top of their game,” Lovell says of the MacKenzies. “As far as I know, they are the largest cabbage producers in Atlantic Canada.”

Of the 300 acres they lease, 130 acres are planted with mixed veggies, 85 of which is cabbage (over two million pounds), which is sold to Freshtone Brands to supply KFC with coleslaw.

About 10 acres are planted with green and yellow beans for grocery stores, with additional acreage in cruciferous vegetables, peas, cucumbers and more. Greg and Tania still grow pumpkins and gourds, which they started when the kids were small to get them more engaged in farming.

Aside from the cabbage and beans, sales are mostly through the onsite market, which is open Sept. 1 to Oct. 31. The market began about 15 years ago, based out of a wagon in whatever field was being harvested, using the honour payment system. Then, seven years ago, they established a permanent small shed with a cash desk for payment and a wagon filled with primarily their own veggies and locally produced honey.

The volume of land leased and acreage planted has dropped, when compared to 10 years ago, but the operation has become more efficient – not to mention the fact that other things have grown in the same time frame.

The MacKenzies’ kids, Austin and Haley, are now 22 and Gracie is 14. They grew up living a farming lifestyle, but Tania says she doesn’t think they will want to take the farm on when she and Greg are ready to retire. Greg has been farming all his life, but Tania and the kids came into it when they bought the site.

Haley recently came home from Kenya after being part of P.E.I.’s Farmers Helping Farmers program, where farmers help with a variety of projects in the African country. She and her brother share what they learn at university with their parents, though both work off the farm when not in school.

“I don’t think our kids will get into farming, but quite possibly running a business at the market land and growing it bigger; doing agribusiness . . . with value-added products maybe?” she ponders. “Our son mentions growing hops and having a brewery here. Then I talk about growing grapes and making it a winery. Who knows? It depends on what customers want to see more of.” 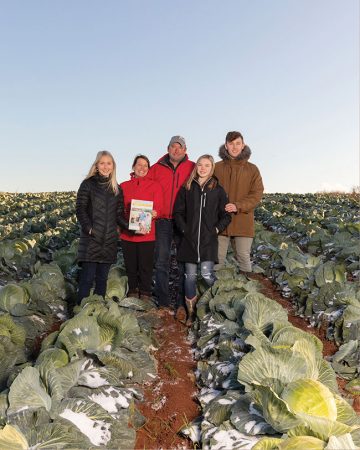 Of the MacKenzies’ 300 leased acres, 130 are planted to mixed veggies; 85 of which are cabbage. Photo by Berni Wood.

Sharing with other farmers is part of how the couple determines some of their next steps, according to Lovell.

“They are real examples of what all farmers are: they are full of passion for agriculture, they are resilient. They are always positive.”

He adds that both Greg and Tania are involved in OYF activities, including helping plan the Atlantic-based national conference.

“I think they’re quite progressive,” Lovell says. “It’s typical of OYF alumni, they are looking for new ways and better ways of doing things.”

And, as Tania explains, things change every year.

“This year we increased our bean acreage because demand was there, but then the grocery store was not honouring local and bought a lot for a cheaper price and it made it very inconsistent for us,” she says. “It was a hard juggle with staffing and beans don’t have a long shelf life so we dumped a lot of beans this summer.”

Even with a large warehouse, modern coolers and the right equipment, the wrong labour and the weather can render the best plans useless.

Student labour over the summer of 2017 wasn’t working out and by mid-September, the couple knew there was going to be a problem harvesting the cabbage.

“When we finally got up to the amount of staff we needed, which was Nov. 1, the cold settled in and then froze,” she says. “We harvested in the snow. It was a slow go, but we were salvaging everything we could at that point.”

After harvesting frozen cabbage, they drew the frost out with salamander heaters, then shipped it for processing, but it was too late. The freezing had turned the inside of the heads black.

“Our supplier ended up buying cabbage [elsewhere], which was super expensive and we cleaned it up and packaged it for them,” Tania notes. “We did this for a few weeks untill ours was ready for harvest. Because of a shortage of cabbage, we had to work earlier in the spring preparing the greenhouses and seeding more early cabbage than we would normally grow.”

All vegetables, except beans, start from seed in the four greenhouses.

“Once in a while we do trials with seed companies to see what is a better growing and storing cabbage,” she says. “We stopped growing turnip this year because of two bad years in a row of growing them and losing money.”

Another change from 10 years ago is the foray into agri-tourism, which gets a helping hand from Gracie.

“We are on year three of Mr. Corn maze and the selfie sunflower maze is in its first year,” Tania explains. “We also host school field trips to the pumpkin patch and corn maze and also do night corn mazes with glow sticks. We are enjoying the agri-tourism side of farming. We call it the fun side of the farm.” 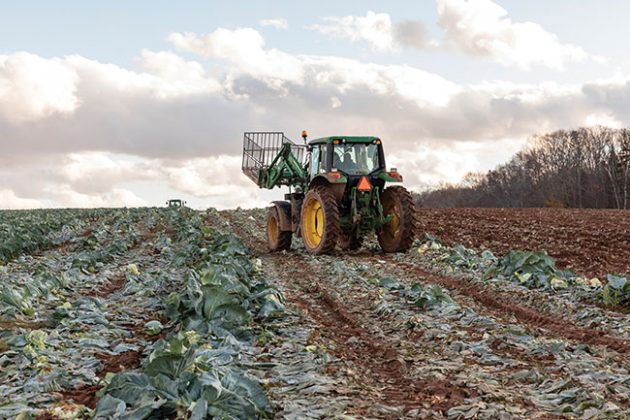 Decisions about what to do next year are made after harvest is over and Greg and Tania get a break away from the farm. One thing that stays the same is long-term quality staff. They have had the same farm manager since they bought the farm and the other full-time team member worked with Greg since before the MacKenzies bought the business.

“We are going through the seasonal agriculture [worker] program, which makes a huge difference,” she says, noting they hired six Mexican workers this year.

In the busiest summer months, they have about 55 employees. Following the cabbage loss due to unreliable staff in 2017, they were careful to make sure they were covered and had enough quality employees in 2018.

Every farmer knows there are ups and downs. The MacKenzies have found a place to share ideas and grow in OYF and continue to make their farm successful, despite the challenges. •

Related
Outstanding in their field
From the Editor: A grand celebration for 75 years
Outstanding young farmers of Manitoba and P.E.I
Twenty years of raspberry production equals constant change
Tags