Raise a glass to the first and only wild blueberry farm in Ontario. 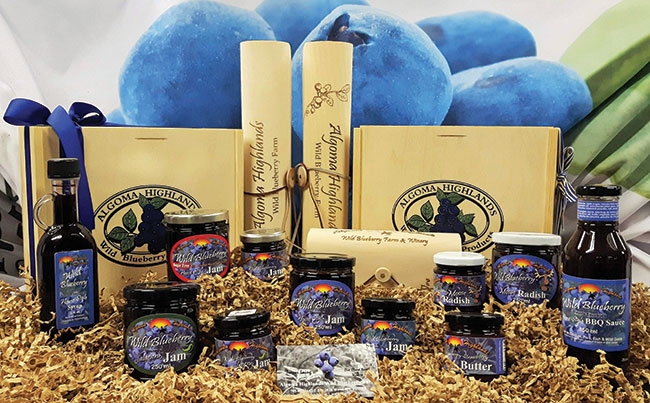 Trevor Laing bought the land he has built into Algoma Highlands Wild Blueberry Farm and Winery in 2006. The operation now includes a winery Contributed photo

The story of how Ontario’s first and only wild blueberry farm and winery came about perhaps started when a large parcel of land near Wawa was deforested some years ago. The 600 acres of ancient Lake Superior bottom – completely stone-free and extremely flat with a sand/silt soil type – quickly filled in with wild blueberries bushes.

At the same time, in the early 2000s, a seed was planted in a man named Trevor Laing.

“I had worked with a person from the Lac St. Jean area of Quebec where wild blueberry production is king,” explains Liang. “He said that Ontario was missing the boat. I looked for some Crown land to buy, but it was a difficult process and I gave up on that route. I came across a parcel of private land that had originally been granted to a mining firm over a hundred years ago and it was ideal. I bought it in 2006 and by 2009, I resigned from the company I co-owned and began pursuing the project in earnest.”

“I had worked with a person from the Lac St. Jean area of Quebec where wild blueberry production is king,” explains Liang. “He said that Ontario was missing the boat.”

‘Ideal’ describes the land in two main ways. First, it already had abundant amounts of wild blueberries growing on it, with ideal soil types and acidity levels and a flat nature making mechanical cultivation easy. Secondly, part of it lies against the TransCanada Highway near the town of Wawa, so a blueberry winery and products store would be highly-visible to traffic. Another plus is the proximity of a major Northern Ontario tourist attraction – Magpie Highfalls – that bring tour buses through on a regular bases during the summer months.

The stage was set for Algoma Highlands Wild Blueberry Farm and Winery to be a success. Competition with other wild or domesticated blueberry operations did not daunt Laing. However, he admits that in terms of cultivation of the crop – the very heart of the business – he had no farming experience at all.

“It was all trial and error,” he says. “A lot of people across Canada own farms that were purchased or inherited. Not many people have created a farm from scratch. I feel pretty good about everything to date.”

“It was all trial and error,” he says. “A lot of people across Canada own farms that were purchased or inherited. Not many people have created a farm from scratch. I feel pretty good about everything to date.”

Laing chose to use a light scrape with an excavator to encourage blueberries to spread, but he says he should have used a mulcher.

“When we develop the fields, there is a fine line between leveling the land and not doing damage to the wild blueberry plants that are already there,” he says. “We have it figured but it was a trial-and-error type of process. Mulching leaves more mulch on the fields for future fertilization and better growth, plus the land is better levelled, making harvesting easier.”

He says they have only about 21 days to get the berries in and labour will always be an issue. Right now, he hires foreign workers to assist during harvest and plans for more mechanical harvesting.

By 2011, Algoma was selling both fresh and frozen wild blueberries. They now sell frozen berries from the farm in 10 pound bags – wholesale and retail – and have added a new 600-gram bag available at the farm and a few retail locations. In 2013, they entered the value-added market with jam, barbecue sauce, and blueberry syrup sold at the farm store and about 75 retail outlets within Ontario, but 2018 will be a big year to add locations and start expanding countrywide. All products are marketed as 100 per cent natural, with no artificial colour or preservatives added. A large commercial kitchen was needed and a large freezer as well.

By 2015, almost 64,000 kilograms of blueberries were harvested. In 2017, they sold about 70 per cent of berries fresh, 5 per cent frozen, 5 per cent in wine (more on that later) and 20 per cent went to value-added products. They’ve added Wild Blueberry Moose Radish and Wild Blueberry Sugar-Free Jam. 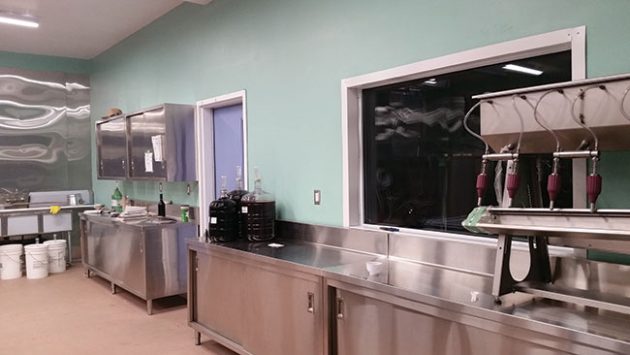 Algoma has also expanded into the value-added market, producing jam, barbecue sauce, and blueberry syrup. Items are sold at the farm store and about 75 retail outlets within Ontario. Photo courtesy of Algoma. 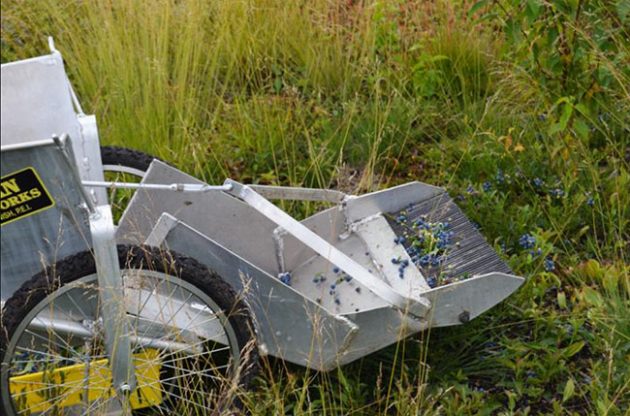 By 2015, almost 64,000 kilograms of blueberries were harvested with about 70 per cent being sold fresh, 5 per cent frozen, 5 per cent processed into wine and 20 per cent made into value-added products. Photo courtesy of Algoma.

In 2013, Trevor and Tracy’s daughter, Talus, planted an acre of strawberries to compliment the wild blueberry production and sell at their roadside stand as a summer job. In 2017, they planted raspberries, and now have half an acre of them and rhubarb, and 6 acres of strawberries. A local beekeeper keeps 30 hives near the strawberries and raspberries for pollination.

“We planted the other berries to extend our season – strawberries in July, blueberries in August, and raspberries in September,” says Laing. “This has been a good draw to the farm and has been very good in creating a revenue stream in terms of fresh that we sold and a u-pick on site. We’ve also planted 125 haskaps provided by the Ontario Ministry of Agriculture, Food and Rural Affairs, and their progress is being monitored by government scientists, but they are very labour intensive in terms of harvesting and require protection from the birds.”

“We planted the other berries to extend our season – strawberries in July, blueberries in August, and raspberries in September,” says Laing.

In 2016, the winery was finished, complete with five 1000-litre fermentation tanks, filtering apparatus, bottler, capper and labeller. The winemaker is Mandi Ramdhanie, who also assists in production of value-added products. (Laing’s wife Tracy looks after the farm’s books, and Laing’s brother is on call to help when required.) That year, 450 kg of blueberries were made into wild blueberry wine, wild blueberry with oak, and strawberry.

“Because we have so many berries, we’ve begun producing blueberry juice as well,” Laing says. “We still have work to do to make consistently excellent wine. Fruit wine is challenging as the sugar levels are very variable.”

They began bottling in February 2018 and hope to give winery tours this year.

Distance was the major concern from the start, being so far away from major urban centres, but Laing says they now have a good market network set up in some of the northern Ontario cities. Another obvious concern is the weather from year-to-year.

Distance was the major concern from the start, being so far away from major urban centres, but Laing says they now have a good market network set up in some of the northern Ontario cities.

“We always worry about an early spring or a delayed winter,” says Laing. “We absolutely have to have snow cover, but we are in a good position in that we get more moisture and a moderating effect from being so close to Lake Superior. But I’d say the climate is definitely changing, with more extreme weather, melts in winter, everything.”

Laing says wild blueberry production will continue to increase as the fields become more mature and the bushes spread. He and his wife would like to eventually offer eco-farm tours and build an education centre to attract global tourists, and also hold a local wild blueberry music festival.